YoshimitsuT3
Member
Offline
I have seen lots of characters that look, sound, and are like Yoshimitsu. Here are some:


If you find any characters that look like Yoshi feel free to share them with me in the Comments.

Karas is from a series of animated movies by Tatsunoko.
Bishamon is from the fighting game Darkstalkers which is made by Capcom.
The Blue Spirit is from the cartoon series Avatar: The Last Airbender.
#1
2011-03-06 22:39

SumSamurai
YOT Elite
Offline
Taira no kagekiyo from game genpei tomomaden, or (Samurai ghost) I think was an inspiration for Tekken 1 yoshimitsu.

Love Machine from Summer Wars. This guy is just another big reason I love this anime. He's the main villain but he's just so badass.

Kusoniki Masashige. He's a 14th century Samurai. I'm not sure if anyone shares the same view but I think of Yoshi when I see this. This statue of a samurai on a steed gives that noble/honor character that Yoshi has. Hannya from Rurouni Kenshin. Since Yoshi has Hannya masks as customizations, this character easily reminds me of Yoshi. He's also a ninja like character who looks seems like a villain but actually has good intentions.

Myojin of Infinite Rage from Magic the Gathering. This art just looks so cool.

YoshimitsuT3
Member
Offline
Can someone explain why Yoshimitsu has a Taira no kagekiyo customization in Tekken 6?
#6
2011-03-25 22:10

# xXAngelBoyXx : what's there to explain?
it's just awesome

No, it's not that. There was a sale on at Ann Summers stores. I got one too!! 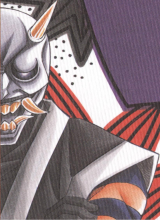 # SumSamurai : Taira no kagekiyo from game genpei tomomaden, or (Samurai ghost) I think was an inspiration for Tekken 1 yoshimitsu.

I think Yoshimitsu and Kagekiyo are similar in looks and a few ideals, but their personalities seem different enough to keep things interesting.