hehe ! Definetly true !!
The head is totally messed up. If there wasn't his sword or the flag, I wouldn't reckognize Yoshimitsu.
And what's with that weirdo laugh ?? Very unusual...maybe thst's just what they want.
I mean, from sc to sc, his look didn't really change that much, did it?

Hehe, almost looks like a huge caterpiller tryin to eat him :D:D:D

Tenshimitsu
The Boss
Offline
Look at these tentacles coming from under his chin. This reminds me... Draenei from World of Warcraft. o_O

Kogamitsu
Administrator
Offline
Hmm, reminds me of that guy in some Pirates of Caribbean movie. Tenshimitsu : Yeah, in WoW you can make your character tell jokes. The Draenei joke was: "What do you mean 'there's an octopus on my face'"? LOL

Gattsu
YOT Elite
Offline
The second outfit is definetly better.
It looks much more like the old Yoshi, and the colours are great!

Hard to find any good pics though... 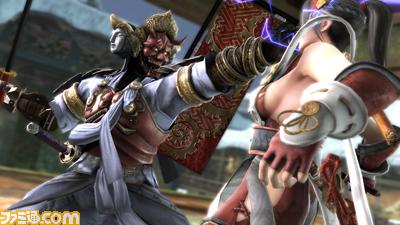 Kogamitsu
Administrator
Offline
Eeeergh, what's with the multiple masks/faces? They're creeping me out (they don't look nice, either). I'd love to acquire the Soul Caliburs I don't have but A) the gameplay system is quite offit, meaning I have hard time trying to get accustomed, and

It gets more and more difficult to take Yoshimitsu seriously...

Sharp
YOT Member
Offline
Yoshi decided he hated everybody after a baby bit him so he wants to use soul edge to make all the infants in the world explode.
#23
2008-10-02 19:16

Fire Kunai
Member
Offline
For some reason and dun ask why but I find his first outfit oddly appealing. I hope I'm not the only one here who thinks that or I'll feel like a right loser >__< But yeah, his second outfit looks more like the Yoshi.

Kirimitsu
Administrator
Offline
I yet have to receave the honour of playing the fourth installment of SoulCalibur. Chances are I'll get to try it next week.

Kagekiyo
YOT Member
Offline
Yoshimitsu voice is better in english, all jumpy with a weird old accent the japanes one is way too low pitch and serious-like, my favorite costume so far is SC3 octopus one especially color modify. Thumbs-down to Yoshi Wooden head, i always thought he was human. Soul calibur Wise, how can a robot have a soul? is he a golem/artificial being like astaroth?

Jembru
YOT Elite
Offline
You prefer the English voice?? I think he sounds too weird now. Too messed up in English, not messed up enough in Japanese. I loved his voice in the original Soul Calibur but they changed it. He still sounded kinda weird but then his voice would go really low now and then as though he suddenly went into 'serious mode'... Videos even on Youtube of original soul calibur Yoshi are really lacking though so I can't really show you what I mean. This is all I can find of the gay golfer http://www.youtube.com/watch?v=fkxKWaYCV-A&feature=related

I have said it before but I shall repeat, Yoshi in English is good for only one thing... in SC3 when he taunts, you can make it sound like he is saying 'onion' which leads to many hours of manic giggling from Jembru.

As for his SC4 outfit... hmm... I really dont know what to make of it. It isn't his best but how do you diplomatically tell someone that their outfit looks crap? Especially someone with a huge pointy sword... Any volunteers??

Kagekiyo
YOT Member
Offline
nahhhh english voice all the way, but dont get me wrong i'm in love with the japanes language i know like 15 sentences in japanes by hearth :D, its just that i prefer hearing NaaAAaaAmMmmMMMmmUUUuuuUU then just too low voice namu. the english one makes you happy before killin is victims/opponent/corpse( if yoshi want them dead they are already dead)
#28
2009-02-25 20:55

Yeah... I probably know 15 sentanses too :p. Actually, I lived in Japan though only took the language seriously when I came back to the UK (I know, I am dumb... dont need to tell me :con). My Japanese ability is up and down all the time. I have only one Japanese friend (and a handful of friends who are learning it as a second language)in the uk so it's hard to really immerse myself in the language enough to reach fluency.. especially as I am almost entirely self-taught (besides the Japanese friend who I see maybe 4 times a year these days)

Though after a few hours' of watching anime without the subs my fluency increases. Generally though, besides being able to make myself understood, my japanese sucks really (check out my fanfic if you like, all Yoshi's dialogue is in 'Japanese' without any translations... you're just meant to guess from the context(that goes for people who CAN speak Japanese too. I bet I made hundereds of mistakes)though I'm not sure this worked as well as I had hoped. It was just an experiment for me really.. lol

But to swing this back around to talking about Yoshi, I should say that even at those times when my Japanese flows nicely (if slighty incoherently), I can rarely understand Yoshi. I struggle a lot with older men on games and in anime because of the way they speak. Took me months to realise that when they were saying 'ja' at the end of a sentance it was a substitute for 'desu'.. lol Thi is the excuse I use when people ask me why I only watch childish anime with sweet teenage vampire girls and talking rabbits when there are so many cooler animes out there... I tell them 'I watch these 'cos I can understand them!!!' (but shhhhh... the truth is, though that is kinda true.. I watch these sad animes cos I really like them... but... dont tell okay... 8)
#29
2009-03-05 20:59

only one of my friend speak japanes, and the stuff i know all revolve around anime or video game so i know like 10 when to tell you you're gonna die XD.

Omae wa mo shinderu! (one of my favorite from hokuto no ken)

try figuring out those one