# TheFumaken : I think Altaïr Ibn-La'Ahad from Assassin's Creed, is like Yoshimitsu:

Altaïr is brutal and impulsive. He makes instant bad decisions without thought or regard of consequences. He disobeyed orders. Ignored advice and warning of danger by his followers and they died because of it. He betrayed his own people and stole for his own gain. I think the entire game is about him clearing up his act. XD

Hrm... no, I don't think Yoshi enjoys fighting that much. I think he enjoys martial arts and sword play, but fighting to him is rather a necessity, to survive and stuff... Can't go around stealing to save the poor without being able to cover your own back lols. Notice in T6 he tries to reason and negotiate with his opponents, but they are all so arrogant that he must fight them anyways.

But one thing they certainly do have in common is climbing walls and jumping off buildings!

TheFumaken
YOT Member
Offline
I'm of course talking about Altaïr, grandmaster of the assassin's order. Not about the foolish Altaïr in the beginning of the game. He's much more like Yoshimitsu if you think of the older Altaïr. Not only that one thing you mentioned. Everything I mentioned too, especially the head-of-their-group-thing. That is true isn't it?
#17
2011-08-04 16:50

Grey
Administrator
Offline
Was thinking about some characters that looked like Yoshi and remembered we had this thread here. Here's a few more characters I found that are like Yoshi:

Amon from Legend of Korra 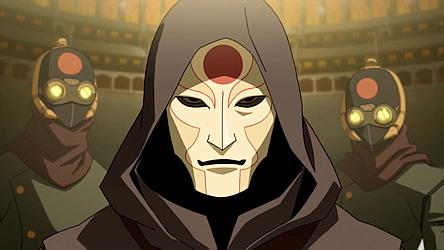 I know he's a villain but he's very charismatic, intelligent, fearless, skilled and dons a sweet mask. He was also a leader of a band of revolutionaries but even though his ideals were out of place, pushing for equality wasn't a totally a bad idea. 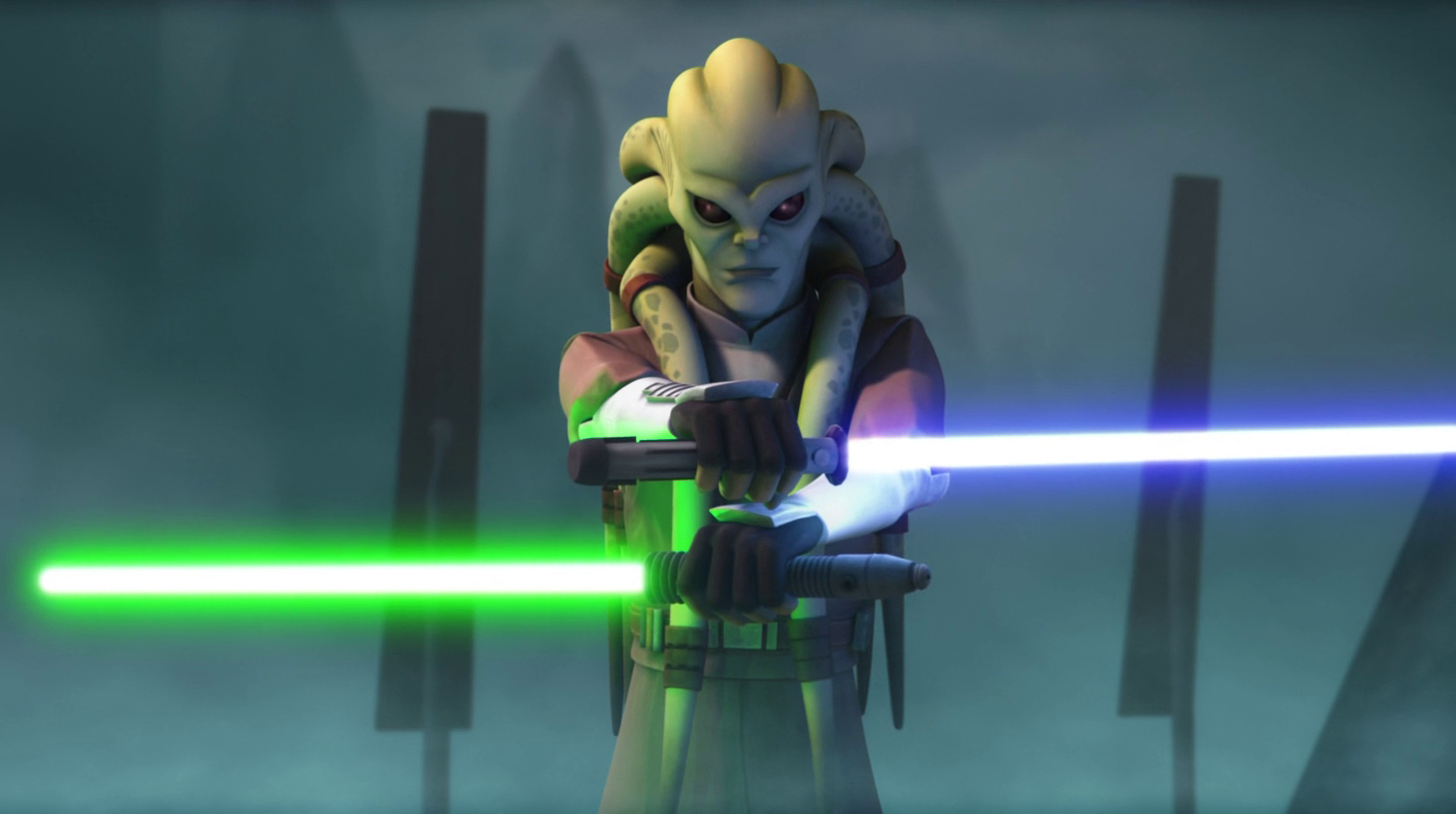 I could totally see Yoshi as a Jedi and with his new Octo design, I remembered this guy from the movies. Pic is from a fight in The Clone Wars and he managed to disarm Grievous to coincidentally dual-wield lightsabers. 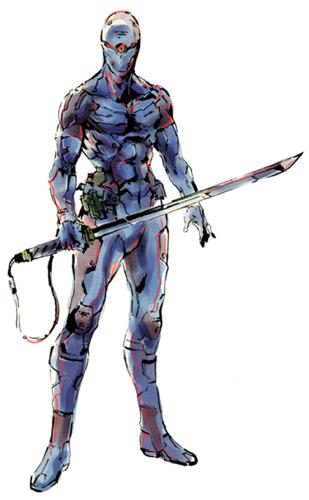 Not a big Metal Gear player but he's my favorite character from the series. He's a silent deadly assassin and it's the design I want Yoshi to be the most.

Lan Fan is a masked ninja bodyguard from Brotherhood which is based on the manga. She got her left arm cut off and replaced with a mechanical one similar to Yoshi.


Ryuma from One Piece

Zombie Swordsman from Thriller Bark in One Piece. Really love his design and thought he's the coolest enemy in that arc. He's more battle-hungry as a zombie but he was a pretty honorable samurai back when he was human.

A.K Fan1234
YOT Elite
Offline
Nice picks especially with Gray fox and Kit fisto =)
the only one I can remember is that reminds me of yoshi right now is also a star wars character

The predator isis, the flesh colours and texture like around yoshi's, head, eyes and neck, both being cyborgs, light sabres.

(I can perfectly see yoshimitsu now, but it just refuses to be seen when it's posted for some reason)

Grey
Administrator
Offline
Cool tweet I found comparing Yoshi's new Rage Attack to one of Kenshin's signature moves from Rurouni Kenshin. I think it's pretty lousy to liken Yoshi to just any samurai out there but Kenshin is an iconic character and it's nice to see some comparisons even though I think the two are marginally different. 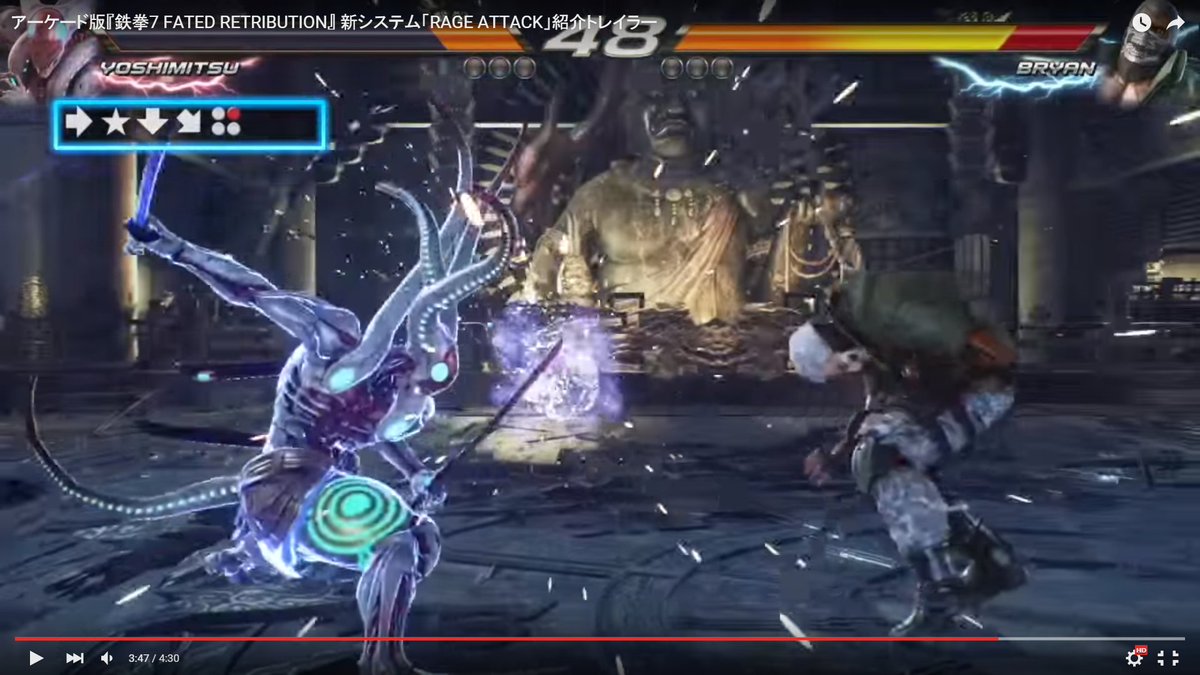 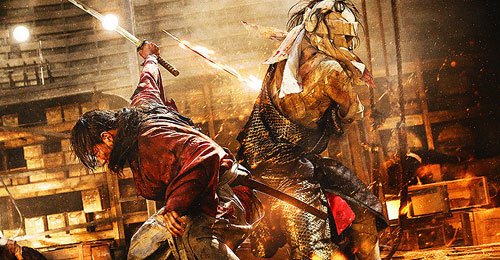 Hehe, Yoshi as a master swordsman, I like it

xXAngelBoyXx
YOT Strategists
Offline
Most pokémon in Pokken borrowed some moves from Tekken, Sceptile is no exception since he borrows a couple from Yoshimitsu:

A.K Fan1234
YOT Elite
Offline
Nice find with all the moves there, but I have a little nitpick with ss+4 (whirlwind) though. I believe it's possible that it's Yoshis T6 and onwards basic 4, the kick is counter clockwise

I had my hopes that Yoshi would find his way into the game, since I saw pickachu with Heihachis moves. It feel would have been better though with Scyther (Dual swords) or Heracross (T4)

Tenshimitsu
The Boss
Offline
How about Genji from Overwatch?

For me it's a mix of Grey-fox and Yoshimitsu.

He says "Yoshh!" when he does something, has a laser green sword, and a direct Soul Calibur Yoshimitsu quote! ("Iza! Jinjou ni shoubu!") Other of his quotes (about self knowledge or revenge) also match Yoshi

Gameplay trailer (That Fujiyama in the background!)

Jembru
YOT Elite
Offline
Oh finally a thread I can be almost useful in! (I'm so out of touch with Tekken right now >.<)

# Tenshimitsu : He says "Yoshh!" when he does something, has a laser green sword, and a direct Soul Calibur Yoshimitsu quote! ("Iza! Jinjou ni shoubu!")


While I have to admit he's incredibly Yoshi-ish, I think the quotes might be entirely coincidental. I was curious so decided to google the expression 'Iza, jinjou ni shoubu' because I didn't know it. It turns out that this is a fairly commonly used expression in manga or historical dramas that are trying to capture the feeling of 'old Japanese', although like much of these old fashioned phrases, many modern day youngsters don't fully understand them.

To show you what I mean, here's my (somewhat rushed because I'm at work! tsk tsk) translation of a post I found on Japanese Yahoo answers

They frequently pop up in period dramas or manga, but what exactly is the difference between 'Iza, jinjou ni shoubu' and 'iza shinmyou ni shoubu'?

As far as I can tell they're both used in similar situations, but I don't really know how they differ.
Thanks in advance.

In this context they both mean, 'obediently' or 'honestly'. 'Jinjou' means 'usual', or 'normal' and 'iza, jinjou ni shoubu' is a set phrase meaning, 'lets make this a clean fight*'. I've never heard 'Iza, shinmyou ni shoubu' but 'Shinmyou ni o-nawa ni tsuke' is frequently used. <Jembru's note: this is literally 'attach to the rope quietly' and used in old Japanese when making an arrest similar to 'please come quietly' in English.>

In this case 'shinmyou' like 'Jinjou', is used to mean 'obedient, respectable', closer in meaning to 'gallant' or 'virtuous' than 'usual' or 'normal'.

'Shinmyou' gets the meaning of 'obedient, respectable' because of its use in 'shinmyou ni o nawa ni tsuke' meaning, 'please come quietly', or in other words 'let me seize you without a fuss'.

So my feeling is that 'iza, shinmyou ni shoubu' might be used in manga and so on in the sense of 'fight like a man'.

That was tricky to translate because 'sunao' translates differently in English depending on the context and we don't have a single word that captures the same meaning. The guy answering is referring to the ways that this and the word 'shushou' can be taken differently depending on the context but the words I had to use in the English don't have this fluidity so it doesn't come across quite so well.

I digress however. My point was just to illustrate that the phrase is pretty common (and okay.. it was an excuse to translate something).

*weblio, an online English dictionary for Japanese speakers, translates the phrase to 'give me a fair chance' and while I guess that works, it feels off somehow. Like, it shows hesitation or subordination.

A.K Fan1234
YOT Elite
Offline
Nice find grey!  That pokemon and especially that yogi robot looks really cool ^^ I haven't seen nor heard much about him, despite much exposure of overwatch. By now you would think that namc makes as many costumes as possible for making as many assciations with yoshimitsu as possible.
#28
2016-10-13 20:03

Grey
Administrator
Offline
I don't play Overwatch but Genji is easily the Yoshimitsu looking character of the bunch. Looks real cool and as far as I know, he's a popular character. Zenyatta also gives off the Yoshi feel and If I played Overwatch, I'll most likely play him.

Another one I saw on Twitter and it instantly reminded me of Yoshi's TTT2 costume is the mythical Pokemon Volcanion.