?Candles flick on too much?and it cast shadows over the pages?.there is just not enough light..why can?t they install electricity? she moved her candle stand slightly to the left and continued reading the passages of the immeasurable light sutra. "Good people do good and move from happiness to happiness and from brightness to brightness. Bad people do evil and move from pain to pain, and from darkness to darkness?. Flashes of Jin?s face gripped her mind. Closing the sutra book, she carried the candle stand and place it on the floor.
She took out the letter from Hwaorang and re-read again every single word in the letter.


?Hey chinagirl:
So how you are doing in China? Having fun killing your tofus? I still can?t believe you turned into a vegetarian?I thought you like dim sum and those peking ducks. I heard you quit your modelling career too. Law told me you went back home for some kind of ?spiritual quests? ..and I thought here?you were hitting it big on the entertainment industry...I was hoping you can introduce some of your sexy girl friends to me?but?you just gave up on your hollywood dream?what can I say??. Kid.what were you thinking back there?
Well?if that is what you want?I have nothing to say.
So now you are finally back to China, you can have as many tofu as you want. How?s your Panda? I?m here having a good time, killing my steaks. Hmmm, delicious. Anyways..Just to let you know, I might be dropping by and visiting your temple. Man..I can?t wait to challenge those shaolin monks..what you call them? Shih shiong? Anyways? I?m competiting in the world taekwondo tournament around the world?presently I?m now in Korea still?but soon, we?ll be flying to china?.so? See ya kid..don?t greet me with a bald head kay! That will give me a heart attack. You don?t want to kill me do you?

I just found this at one of the magazines. Law sold your pic for $500. That geezer. Anyways, I got it back. It is safe with me now..but I thought it might cheer you up a bit. It did make me laugh when I saw it. Haha..?it reminds me of you back then in high school time. You always have this silly look on you. 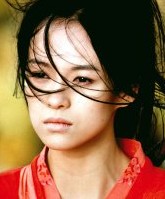 His letter warms her heart. "since when did I start being friends with you again?" she said as if talking to Hwaorang personally.

Taking out the box, she opened it and brought out Jin?s pic.

She had took this picture of him standing on the balcony?.she still remember how she had begged him to give her a smile. ?He smiled just to be kind to me?. Jin was smiling?she remembered how estatic she felt when she finally was able to see him smile for the first time.?at that time she never notice. She always beam proudly to herself that she was perhaps the first person to ever take a pic of Jin smiling so kindly. It was the only time when he had let his guard down and although there was no anger or any dark feelings that surround him?sorrow lingers in his eyes ?but now?perhaps years of experience had taught her to see the eyes of loneliness and sorrow. This picture was not a happy one?those eyes were nothing but fear, sorrow and pain. He never smiled afterwards.. He was drowning in his sorrows...he was 19 at that time?19.

and what do I look like when I was 19? .?.still looking as silly as ever.
Ling laughed and put the pics together side by side. ? We look like a couple don?t we? We are meant to be together aren?t we?? Xiao Yu shook her head to stop her mind from gripping the past again. She gently put back all the pics that she had collected throughout the years and stored it safely in a little red china box with a phoenix and a dragon picture carved outside. She wondered what time is it? She still would have to get up at 4 am. It didn?t matter. Somehow...the older she got?the less she could sleep. It almost seemed she had grew into a restless spirit. She could hear the sound of crickets calling and the wind howling feriously outside. She blew off the candle and put the candle outside the doorway so the fumes can whif any direction it wants outside the wind. She went back to her bed of thin mattress and lied there, drawing her thick pink cotton blanket up to her chin for security. Turning sideways , she curled up to sleep.

?everyone?s aura were unhealthy. A dark and almost sickening chi surrounds their being. All of their hearts were poisoined by greed, hatred and delusion. Their greed for victories..yet striving for the moments that will always be impermanent. Perhaps it isnt about the striving. When there is a winner, someone would have to loose. It hurts to see people fighting to kill. They misuse the art of martial arts....this isnt about martial arts anymore?this is people reacting on their anger and hatred deep inside?like a ripple effect, whatever that energy concentrate on, that object will be the target of abuse....it makes them all so cold and hurtful to each other emotionally and physically. Everyone here lacks loving kindness?and without love in their hearts, they can?t manage to be friendly to each other. Although most of them have a high level of concentration which shows during their fights?yet most of them are delusional for holding wrong views..and they spend their spirit and lives concentrating on things that are destructive and consumes them?.none of them knows the true meaning of life. Even if they had won and seek revenge on a fight?.it will all become empty and meaningless down the path?.the human heart in nature are desirous of peace and harmony. I didn?t want to think of them because when I do, I could pick up one of their chis, dark feelings or emotions and it hurts?it hurts my spirit as if these dark feelings, emotions and thoughts were my own. I just want to discard them instantly. I don?t understand how anyone would want these darkness to bind with their spirit and mind..I don?t want to end up like them?like him?.[/pgstyle]