Making of a grand Yoshimitsu pic

Kogamitsu
Administrator
Offline
Greetings, lads 'n lasses. I'm working on a major Yoshimitsu picture, and I thought I could keep track of the work and see what people have to say about it. Mainly, if I've been doing something terribly wrong.

So far I've got the first draft ready. Too bad my scanner really, really hates my sketchbook: 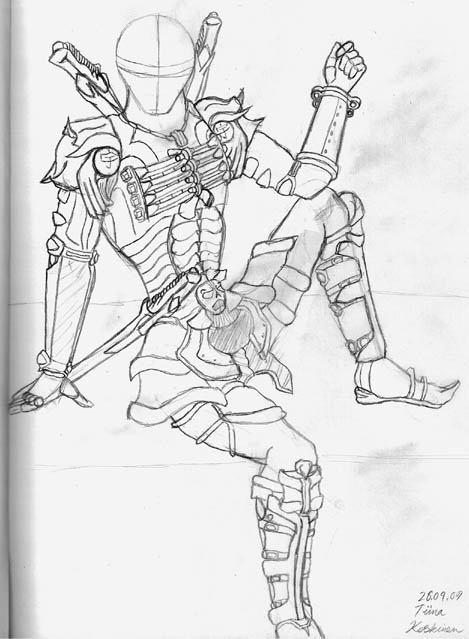 Yes, the head is still missing... for obvious reasons.

While I'm not trying to get the new armour 100% correct (the thing is offit, anyway... and a real pain in the arse to draw!), I thought I would celebrate the coming of the next Tekken by including it in the pic. Especially now as the new trailer promised a major role for him

What I'm planning to do next is finish up the draft by adding the head (no worries, this is "official" Yoshimitsu that isn't tainted by my imagination

and finishing up the lines and generally tightening it up a bit. After that I'm going to trace it and make a good, inked lineart for it before digitally colouring it or shading it by hand, whichever seems better for it.

Questions?
- it's five past four, if you were gonna ask me what time it was